Believing is Seeing: Being Taken by Pictures
The most frequently asked question I get is, “How do I take better pictures?” The answer is a simple one; stop taking pictures. Instead, consider what the photographer Ernst Haas suggests; be taken by your pictures.
So what does it mean to be “taken by your pictures?” Being taken by a photograph is very much like the moment you first fell in love. The person you fell in love with took you, and if you were lucky enough, they were taken by you. Imagine if you could have that happen with every one of your photographs. You were so taken by the events you saw through the lens that you made a photograph, and when someone views that image they will be taken to same place you were.
Okay, that’s a great metaphor, the moment you fall in love thing, but the pressing question is, Do I have pictures to show the difference between taking and being taken? Yes I do; I have four. I was recently in Morocco teaching a class for the Palm Beach Photographic Workshops. (Here’s the link to the images on flickr .) I was in a swiftly moving crowd in the Medina in Marrakech when I saw a boy on his father’s shoulders. He turned his head to look at something and as he did, I focused and shot. No thought other than his pulled me through the camera and caused my finger to fire. 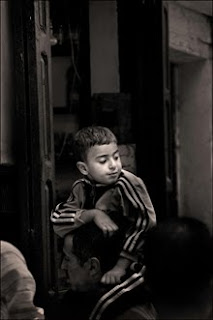 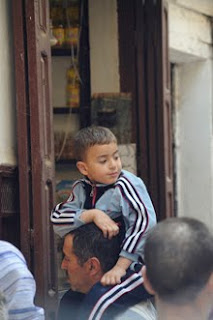 Then, being the paper trained Hollywood photographer that I am, I proceeded to take three more images in which I filled the frame with just good ol’ text book composition. What I got was three boring shots. 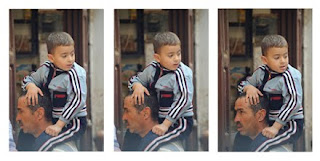