So This Photographer Walks Into a Recording Studio... 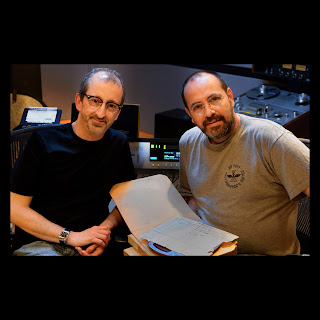 SO I get this job, I have to fly to Salina Kansas to Photograph a portrait for Sony Music. I'm thinking SCORE Kansas City BBQ here I come!! Oklahoma Joe's and Gate's BBQ are calling my name... Last minute we are told we have to reroute and go to NYC and were are now flying out of Wichita first thing in the morning. So no Gate's and no Oklahoma Joe's for the Vin. (But there now will be Dovetail! So I have that going for me... Which is nice) But that's not the story.

The story is Mark Wilder, who I am sitting next to. He won a Grammy for mastering Miles Davis's Kinda Blue. While we were were doing the shoot he asked if I wanted to hear the actual session recording (I am holding the actual source tape of Kinda Blue in this shot). It was as if all of the musicians were in the room, right down to being able to hear the sound of the movement of the valves move on the trumpets. Elvis, Hendrix recorded in this studio it was also the last place Lennon recorded moments before... enough said on that. I wish I could be half as nice and half as giving as well as half as gifted as he is. What a way to spend a week. Oh yeah... The next day I had lunch with Jay Maisel. He shot the cover image of Kinda Blue AND to think I got paid to do this WOW

Image captured with a Nikon
D4 shot on Lexar 128gig smart media
Posted by Vincent Versace at 9:04 AM